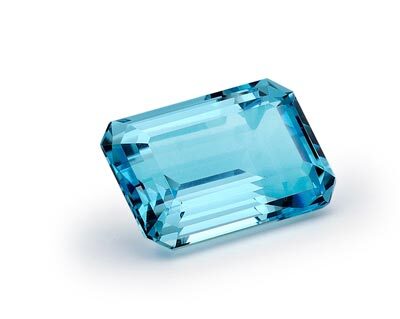 Topaz is the birthstone for those born in November and symbolizes the noble characteristics of Wisdom, Courage, and Sincerity.

Topaz probably owes its name to the island of Topazos (now called Zabargad) in the Red Sea, the original source of Peridots.

Like many precious stones the colour can vary including pink, blue, yellow, to yellow-brown. However the most prized is the pink, and the reddish-ginger, which in the finest quality, is called Imperial Topaz. The blue topazes are sometimes confused with the paler Aquamarine, but generally are a more intense colour.

During the 18th Century the most important topaz was at Schneckenstein in Saxony. Today the Minas Gerais province of Brazil is the most important source, although there are other deposits in Afghanistan, Burma (Myanmar), Madagascar, Nigeria, Zimbabwe, and Pakistan. Light blue topaz has been found in Northern Ireland, Scotland, and Cornwall, England. In 1964 some huge blue topazes were found in the Ukraine each weighing 100 kilos.

Topaz is often confused with other stones, particularly the more common citrine, a yellow form of quartz, also mined in South America. Many citrines are passed off as the more valuable Topaz, by giving them false names such as "Gold Topaz" or "Madeira Topaz". They are occasionally confused with the less valuable Smokey Quartz, a darker brown member of the quartz group of gemstones.

Cellini uses very fine quality topaz from mines in Brazil. Illustrated is a Blue Topaz in an emerald cut, and an Imperial Topaz in a pear-shape.